“Amateur” artist Tobin recently completed his Four Elements garden mosaic, and it is amazing for several reasons, the least of which is the fact that it was created over a span of six years with the artist getting up at 5 am to spend 45 minutes on it before leaving for his day job in corporate project management.

Here’s what I find impressive about Tobin’s mosaic: 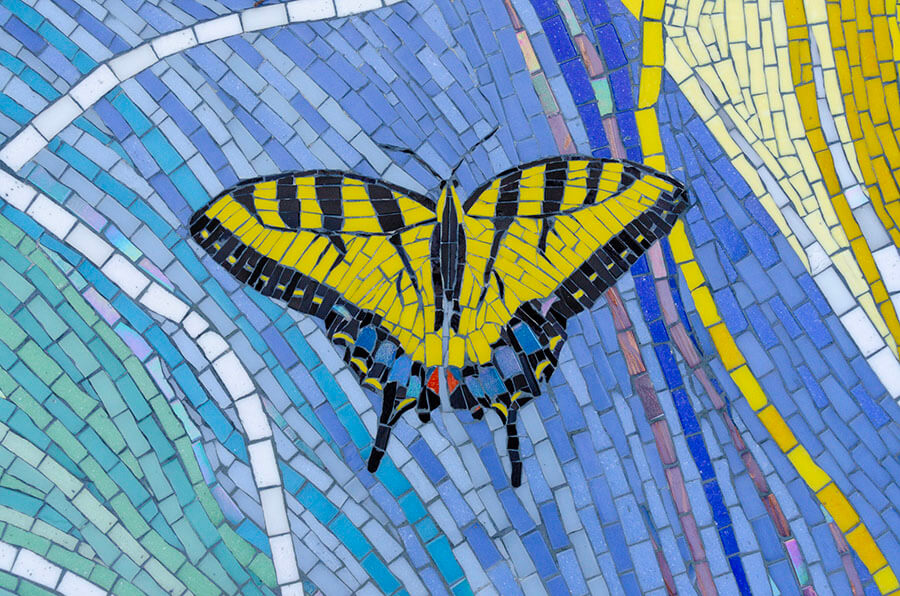 Mosaic Swallowtail Butterfly. Note the uniformity of the grout gap in the background, which is as impressive as the detail in the butterfly.

Artist Jen Vollmer recently completed a shower mosaic which features fish and flowing water executed in the same colors as the surrounding mosaic tiling. Jen says that in retrospect, she wishes she would have used a darker grey grout and blue/green glass tiles instead of the light blue, which would have increased the contrast.

I’m partial to intense colors and strong contrast, and those are required for an image to be eye-catching, but what struck me about Jen’s mosaic was that it is subtle in a professional way, integrated with the existing tile work and intentionally calculated to not stand out too strongly.

It was almost as if a client had commissioned the work and said, “Make the design figurative and naturalistic and have its own flowing andamento, but make it also integrate visually with the grids of tile that it runs through, and do that as seamlessly as possible.” END_OF_DOCUMENT_TOKEN_TO_BE_REPLACED

All that being said, it’s also important to not waste expensive materials and to not produce something that falls apart quickly because you didn’t take the time to look up a few basics. END_OF_DOCUMENT_TOKEN_TO_BE_REPLACED