Artist RJ Spurr recently completed two mosaic tables for his home, and I wanted to share them because the level of craft work is excellent, and the designs are integrated with the color schemes of rooms where they were installed.

The great thing about dry indoor mosaics is that you can use wood as a base, and that means you can put mosaics on wooden tables. Thrift shops, yard sales, and unfinished furniture stores are great sources for tables, but you can also breath new life into old tables you already have on hand. END_OF_DOCUMENT_TOKEN_TO_BE_REPLACED

Georgia Art Teacher Connie Wells has been working with her students on a memorial cross project:

Highland Christian Academy in Valdosta, GA  wanted to remember one of our 8th grade students, Maddie Pitts that recently passed away from cancer in a personal, honorable way. As we constructed a small garden area with a pink bench and beautiful flowers, the students will be making rows of mosaic tiles to place on the centerpiece cross as a personal tribute to her memory. Maddie’s siblings, will also place a personal row of tiles to add to the memorial.

We are so grateful to my daughter Katie at Mosaic Art Supply in Atlanta for their gracious donations of beautiful tiles for the students to compose their personal contribution. We are grateful to Home Depot for the grout and building base for the cross.

The cross stands 6′ by 4′, with its backer material mechanically fastened to the wall. Each line of tile is created by students.
END_OF_DOCUMENT_TOKEN_TO_BE_REPLACED

Mosaic furniture can be made from glass mosaic tile more easily and more affordably than it can be made from pieces cut from antique china and other patterned dinnerware. It’s also much more colorful! The choices available range from bright rainbow colors to soft pastels to different color families, earth tones, black and white.

You can even render portraits and landscapes on things like headboards because you have a complete rendering tool.

When you use glass tile instead of whatever you could scrounge up from months of yard sales and thrift shops, you start with a lot of horsepower on your side. END_OF_DOCUMENT_TOKEN_TO_BE_REPLACED

Repeating simple designs or motifs is an effective way to make iconic compositions that catch the eye, and you can take this technique to its extreme to produce abstract art where the pattern itself becomes the subject of the art and not just a tool for rendering figures.

Historically, mosaic icons were made with traditional materials like smalti, marble, and gold leaf glass. Those traditional mosaic materials might be preferred if you are trying to make a reproduction that looks historically accurate, but they are more expensive and more difficult to work with.

Do You Need Smalti?

If you have any latitude in choosing your materials, remember that it is possible to make striking and realistic images using ordinary vitreous glass mosaic tile, which is both affordable and easy to work with.

END_OF_DOCUMENT_TOKEN_TO_BE_REPLACED

You can make mosaic street numbers and signs using a grid, but mosaics made from irregular shapes of non-gridded tesserae are more interesting, especially if you use concentric andamento for the background surrounding the figures.

Sara Sommers emailed us some pictures of her mosaic street number plaque, and it is made from cut pieces of tile in strongly contrasting colors. It is definitely worth checking out if you are thinking of making a piece with large mosaic letters or numerals.

For starters, Sara uses strong color contrast between her numerals and background, which is critical for making eye-catching art. She also uses multiple related colors and variegated patterns instead of solid monochromatic color fields. END_OF_DOCUMENT_TOKEN_TO_BE_REPLACED

Debbie’s mosaics have interesting elements and personality in spite of being relatively simple designs, and that is no small thing. END_OF_DOCUMENT_TOKEN_TO_BE_REPLACED

For people wanting to make a portrait of their furry friend, I wrote an article on pet memorial mosaics using April Costigan’s work as illustrations of what is possible in terms of capturing likeness. The problem is that for many people, the task of rendering a realistic portrait of their pet is beyond their current skill level.

Fortunately, it is possible to make a pet memorial mosaic without the pet’s portrait and still make it personalized and specific to that pet. For example, instead of attempting an image of your pet, consider spelling their name in mosaic and making the surrounding area significant in terms of colors and found objects. More on that later.

Artist Jill Gatwood emailed us some pictures of some pet memorial name plaques that she has made, and they are good examples of the visual interest that can be created in the background with patterns of contrasting colors. I wanted to show these off because I think people who aren’t confident in their ability to draw will be inspired to make their own versions. END_OF_DOCUMENT_TOKEN_TO_BE_REPLACED

Artist Jen Vollmer recently completed a shower mosaic which features fish and flowing water executed in the same colors as the surrounding mosaic tiling. Jen says that in retrospect, she wishes she would have used a darker grey grout and blue/green glass tiles instead of the light blue, which would have increased the contrast.

I’m partial to intense colors and strong contrast, and those are required for an image to be eye-catching, but what struck me about Jen’s mosaic was that it is subtle in a professional way, integrated with the existing tile work and intentionally calculated to not stand out too strongly.

It was almost as if a client had commissioned the work and said, “Make the design figurative and naturalistic and have its own flowing andamento, but make it also integrate visually with the grids of tile that it runs through, and do that as seamlessly as possible.” END_OF_DOCUMENT_TOKEN_TO_BE_REPLACED

Artist Megan Heazlewood makes strong use of contrasting colors in her iconic mosaics, and I think her work is inspiring for that reason. 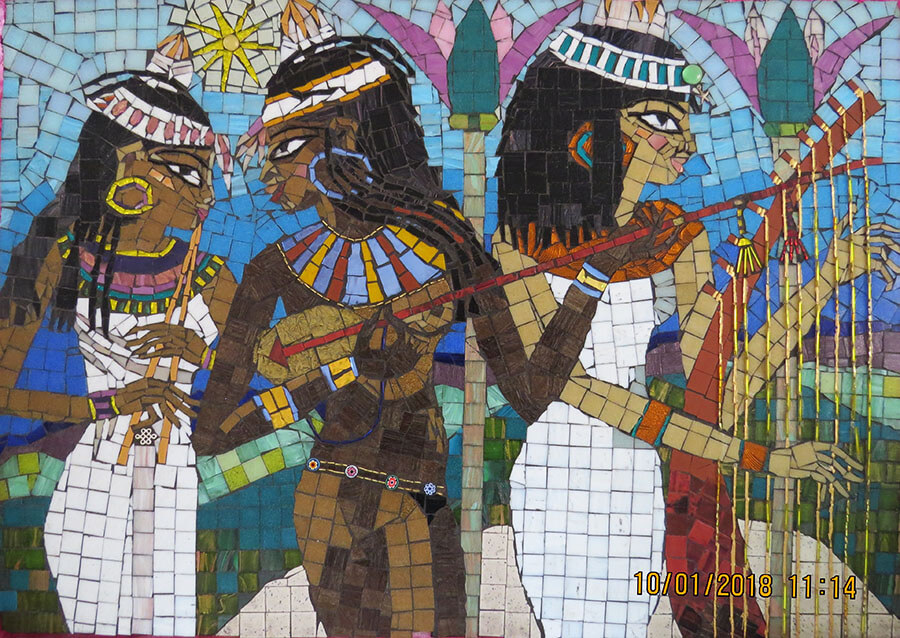 There are several contrasting color pairs in Megan’s mosaic of ancient Egyptian musicians: the teal and pink of the lotus flowers, the blue and gold, the white robes and the different skin tones, the blues and greens versus the burnt orange.